You are here: Home › Blog › Change Comes From the Inside
By Margaret on January 18, 2015 in Dog Training

As I watched the young, 8 month old German Shepherd Dog spin and bark in its crate, I was wondering if there was any amount of money worth doing this at 9a.m. on a Sunday morning, it seemed like a good idea on a Tuesday afternoon, when I scheduled the lesson!   Once I covered the crate and the dog could no longer see me, or the older female GSD in the house, he calmed down and lay quietly.  Needless to say, crate training was a main reason I was at this young couple’s house on a Sunday morning.

The first thing that struck me as I walked into the house was that the older dog was in a down stay, and the house was organized and the child was quietly waiting for me to arrive.  The owner released the old girl, and she came up to me, friendly and happy to see me, in a leather buckle collar, this was looking good!

Once I covered the young dogs crate, the young dog calmed down and I could talk to the owners about what was going on.  They said he was a lovely dog, friendly with people and dogs, but when he got excited, especially in his crate, he couldn’t calm down.  Also, once they let him out of the crate, he mauled everyone, and they resorted to having him drag a leash around the house and trying to control him that way.

We talked about limiting the visual stimulation of things that got him excited;  movement, the old girl and their cats.  We also talked about a bigger crate and a manners minder to reward calm behavior, and the owners were on board.  But once we get him out, they said, he is uncontrollable.  How to handle that?  It was overwhelming them to deal with him and they were worried that he would never be a part of the household.

I talked to them about self-control coming from the inside of a dog, not from controls that you put on the outside of the dog.  Instead of trying to stop everything he was doing wrong, how about showing him what gained reinforcement and what lost it.

I started to talk to them about the basics of him controlling himself when coming out of the crate, and found out that they already did that and that he would stay in until released.  Wonderful!  Time to open that crate and see what we have!

I opened the crate, asked the dog to wait, which he did quietly and I released him, and was instantly mauled.  I got a little space between him and I and asked for a sit, instant compliance, and I reward with a food treat, a down, and the same quick response. You could tell this couple had worked with this dog, and he loved to work, but it was the basics of how to just be with him that he was missing.  If he wasn’t being controlled, he didn’t know how to control himself.

I ran out of treats, and again was mauled and I immediately put him back in his crate.  I told the couple that he can come out to be with us (no leash) and be in the house, if he can control himself from mauling us.  I armed myself with a toy, opened the crate door, and had him  wait until released.

Now I threw the toy, and told  him to get it.  He was so happy!  He ran  around with the toy, so happy to be loose and free, it made me laugh.  He does a couple of drive by’s to see what we are doing, but does his own thing, playing with the toy, and we continue to talk about consequences to behavior.

This dog wanted to be out with its owners in the worst way, and they wanted him out.  So now this young dog needed to learn that he controlled if he stayed out with them, or ended up back in the crate.  Several minutes go by and he comes up to me and mauls me again, and I calmly put him back in the crate.  Fifteen seconds later and a wait to come out again, he is allowed out and a toy is thrown.  Back to play he goes.   Now 3 or 4 minutes go by and he entertains himself with his toys, and then he comes back up to me, you can see he wants to jump on me and maul me.  I look at him and point to a toy “go get your toy buddy” and he does.  Wonderful!  Then he plays for 30 seconds or so, looks at me, and goes up to the owner and mauls her, which she just calmly put him in the crate.  Fifteen seconds/wait at the crate, free again.

He zoomies around, enjoying the freedom of just being with us, and he comes up to us and you can see he wants to jump on us, and the owner tells him to go get a toy, and you can see the light bulb moment, if I go play, I stay out, if I jump up and harass them, I go in the crate for a time out.  He has one more incident with the child, where she was sitting on a chair and he comes up to harass her, and she tells him to go get his toy, his light bulb went off again, oh yeah!  I have options here!!!!

I left their house and I was thinking that there was a time that I would have stood there with a bait bag on and rewarded sits like crazy, trying to keep the jumping up/mauling behavior at bay.  I would have thought that reinforcing the sit behavior more would help keep the dog under control.  In this case, with this nice friendly dog that already had good sit/down/wait behaviors, what he really needed to learn was that he had options, and that those options lead to consequences, and it’s always up to him what path to choose.

The ability to be able to control himself, to really modulate his behavior, will give that dog freedom that bribing or scaring him never would.  He has tools now, and that is a wonderful thing to see any animal gain.  Definitely worth getting up early on a Sunday morning to see!

Margaret Simek has dedicated her career to fine-tuning the art of positive training to achieve results for pet dog owners as well as enthusiasts and trainers working at the highest levels of dog sports.
View all posts by Margaret →
The Positive Proof
Go Treat Yourself Like a Dog Today

3 Responses to Change Comes From the Inside 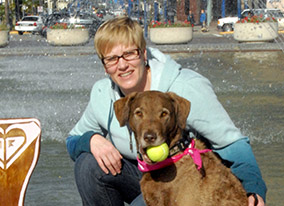